"Vermiculture Innovation S.L. is one of the three companies that are dedicated today in Spain to a little known business: to obtain high quality fertilizer by composting organic waste thanks to Californian red worms. This is a very limited practice in Spain compared to other European countries, where it is especially appreciated, as are the cases of England, France, Italy or Holland."

Vermiculture is a composting process of organic matter using California redworms. The manure is fermented several times directly assimilable by the plants and without the unwanted characteristics in the manure, since the earthworm humus neither ferments nor rots. The worms are highly reproductive, being able to double their population every two months, that means that 1,000,000 worms at the end of a year become 12,000,000 million. In two years they can transform 240,000 tons of organic waste into 150,000 tons of fertilizer, 100% natural and ecological. It is a high quality product, with a great organic richness, lacking phytotoxicity and easy to handle. There are only three companies registered in Spain that are dedicated to the creation of earthworm humus, while in countries like England, France, Italy and Holland, their production and use are much more widespread.

The company Vermiculture Innovation S.L., has been engaged for two years in the breeding and commercialization of worm casting (earthworm humus), with the brand "Lombec".

The industrial exploitation of this system, according to its owner Ramon Trepat, must start from the basic concept of working with living beings that require certain requirements in their habitat, which will determine the efficiency and economic performance of the system.

The industrial breeding of earthworms in the waste treatment, according to Trepat, is made by disposing the mixed waste with the appropriate population of earthworms in small piles of variable length and width, with an approximate height of 30 or 40 cm. Afterwards, between 20 and 30 kilos of food are added per bed in layers of 5 - 10cm every 10 - 15 days, providing the necessary moisture for fermentation. The final product obtained is blackish, granulated, homogeneous and has a high microbial load that protects the root of bacteria, has neutral pH, produces hormones that stimulate the growth and vital functions of plants, in addition to restoring balance of the nutrients.

The production plant in Lleida where the earthworm casting is produced has 40,000m2 and it can produce about 4 million kilos of earthworm humus. Currently, its production depends on the reproduction capacity of earthworms and is centered in about 600,000 kilos per year of worm casting, which is commercialized throughout the Catalan and Spanish territory, and exported to Portugal. 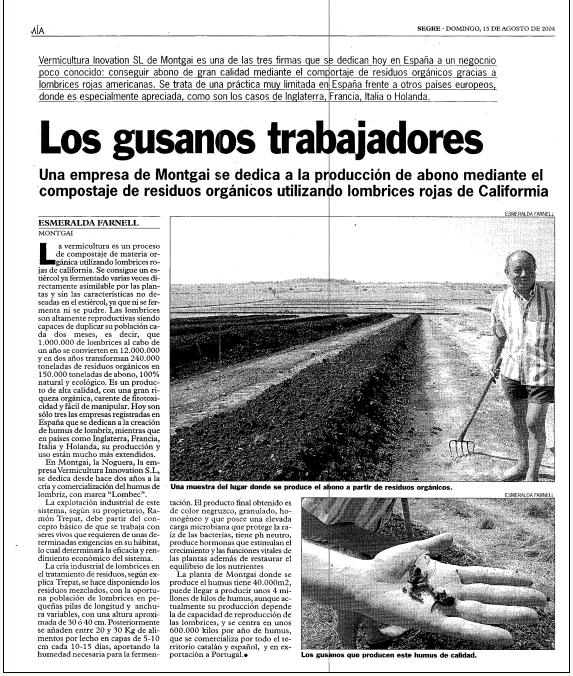 Grow salads on your balcony